This event was held on Saturday the 11th of September 2021 via zoom. It started at 2:05pm CAT and had 5 panellists. These were; Dr Ateh Stanislas who is the district medical officer for Bakassi health district Cameroon, Mr Mbiyzenyuy Ferdinand who is the Secretary General of the Cameroon NCD Alliance, Veronica Shiroya, Health Promotion Alliance Kenya/ Heidelberg Institute of Global Health, University Hospital and Faculty of Medicine, Heidelberg University, Germany and Dr Bernadette Ateghang-Awankem who is the Founder and CEO, Pan-African Health Systems Network. The event was moderated by Maikem Emmanuela who is a journalist. 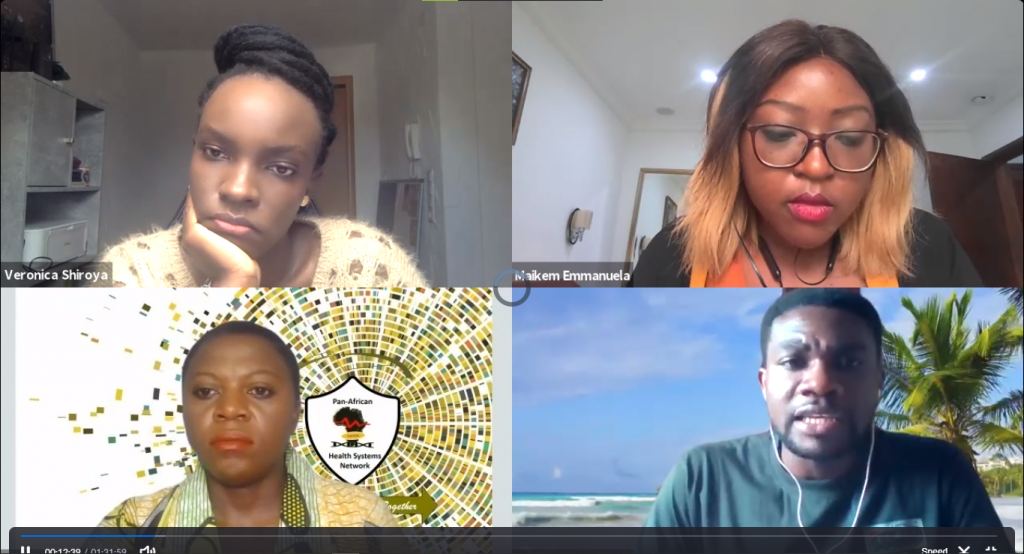 From the discussions, communities were indicated to be key stakeholders in the fight against NCDs, from individuals preventing these diseases through their daily activities, groups, companies and industry and the state. The panellist went further to identify some key partners like Ecobank who have been involved in the fight against NCDs in Cameroon. It was also noted from the discussions that companies whose activities or products are potential risk for NCDs like companies producing fizzy drinks were not “partners to consider in the fight” as they were rather part of the problem.

As for the situation of NCDs in Cameroon, it was reported that NCD prevalence was above 30% and the young were getting more NCDs. The most common NCDs being diabetes, cancers of all types, heart diseases etc. According to the panellist, mortality from NCDs is on the rise and is the leading cause of deaths worldwide. The situation of NCDs in Cameroon and Kenya were not very different and probably similar for all of Africa. As for progress made thus far, awareness about NCD risk factors, prevention and causes has gained more ground compared to the previous years. Individuals are becoming more aware and gradually making efforts to mitigate some of the risk.

Although much is still left undone on the part of individuals, the community and the state some gradual progress is being made.

It is also noted from the discussions that individuals at the level of the community also involve in practices that are risk for NCDs. One of these activities was cited by the DMO of Bakassi indicating the use of chemicals in fishing and farming so as to increase yield. These are some practices at community level that may need to be carefully addressed while also continuing the fight against the other major causes such as tobacco use, physical inactivity, the harmful use of alcohol and unhealthy diets.

The session which lasted for an hour thirty minutes ended with questions from participants directed to specific panellist. The questions were centred on current campaigns on the fight against NCDs and the way forward. The event ended at 2:37pm with a closing remark from the moderator.